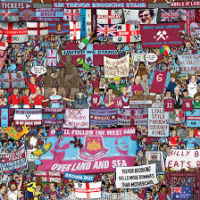 IronHerb
January 25 in Match Threads and Streams
Should be straightforward but it's the FA Cup. I think the team will be a mix of experience and youth.