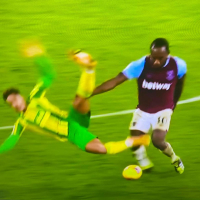 OldCastleSwift
November 2018 in Member info & Family Album
Earlier this week I became a father for the first time. Proud doesn't even begin to describe how I feel.

Question is; do I raise him as a West Ham fan? Part of me wants to, if only to continue the family tradition, but then part of me wouldn't wish the level of pain and heartache that comes with the territory on anyone ;lol